You are here: Home > Got a Minute? 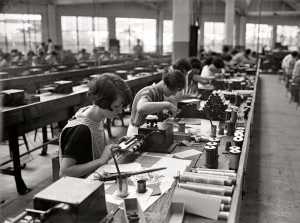 I spend a lot of time looking at statistics on the Commons looking for patterns and trying to figure out how people actually use it.  It’s surprisingly difficult to make general statements about how people engage with the Commons, but I have learned that the utility of the Commons as an instrument tends to outweigh it’s social capacity.  That is to say, many people come here for very specific reasons that are usually centered on the groups.  On the one hand, that’s great – it’s what we built it for, but on the other I’ve been thinking that we could do better in trying to create pockets of activity that were more along social interests than just facilitating the flow of business.

I realize that I’ve said something along similar lines a few posts ago, but since then I’ve started a new project that needs a little tending from the whole community.  Over in our wiki I’ve started to make entries for very broad topics like Art, Technology and Literature on the Commons.  I went in and put together a list of all of the blogs and groups that were somehow related to the topic and my hope is that this creates a handy sheet of reference for anyone who might want to poke around and make connections.

Take ‘Art’ for instance.  145 of us on the Commons have ‘Art’ or ‘Contemporary Art’ listed as an interest on our profiles, but when I went to make the wiki page for Art the best I could do was four blogs, two of them inactive.  Now don’t get me wrong, Michael Smith’s @Msmith It Cannot Be Trivial is an excellent blog, but we art lovers can’t really expect him pull the load for CUNY.  Where are the art groups?  Who’s blogging about the gallery circuit right now?  Where’s the group for art professors and instructors throughout CUNY?  The flip side of that is ‘Technology’.  Admittedly, we’re a bunch of geeks around here.  The ‘Technology’ list is exhaustive and obviously CUNY on the Commons cares about the intersection of technology and education, just look at the joint.  In all cases I’ve decided to list every blog and group in a topic regardless of whether it’s inactive or not, since a fallow blog or group is not dead – it’s just waiting for its audience.

In the coming weeks I’m excited to go in and add more fields.  Librarians and Library Issues is next up on the list.  Music is coming soon, as are entries for Anthropology and Politics/Political Science.  What I’d like is for us to really take advantage of wiki.  If you feel like your blog or group qualifies go ahead and put it up.  See something I missed?  Fix it!

Hopefully as we get more of these up and running it’ll be a little easier to track down some corners of the Commons for you to hang out at beyond the commitments that might have brought you here originally.  If you’re up for making an entry of your own let me know!