You are here: Home > Lookin’ Sharp 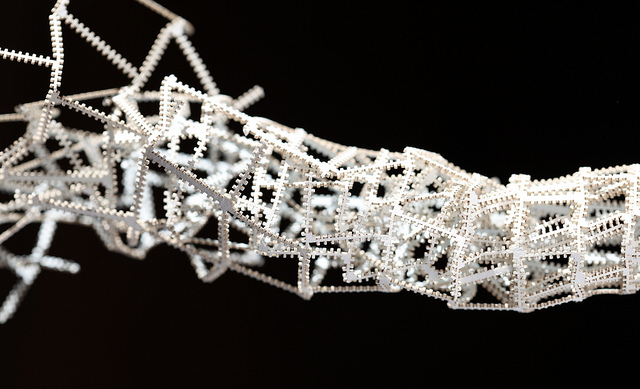 In the halcyon days of summer 2010 the Commons needed some PR material.  Our little digital corner of the university was only a quarter or a third of the size it is now and flyers seemed like the way to go to boost the ranks.  For about two weeks or so Matt Gold and I fussed over all the little details like a couple of petite Rem Koolhaases.  It was imperative that we made sure the balance was right, the message was clear, the tone was smart enough, forward-looking, agile.  Hip even? When we thought we had it just right we let our resident artist Michael Smith look it over.  Eventually we felt like we finally got it in good enough shape to hand over to a graphic designer.

Yup.  All that work was for the rough draft.

The final version came out beautifully and since then we’ve produced several print items that continue to develop the aesthetic established at the founding of the Commons.  I really treasure that experience of working on the flyer because it was one of those moments where I knew that everyone on the team was working on something we really loved.  You don’t fuss over a distance of three pixels halfheartedly.  I can promise you that everything on the site has been considered, discussed, mulled over and occasionally passionately argued for.  I mean we don’t knock over chairs or wipe off our desks with our arms but we care about how things look here.  You should have seen what it took to get Ground Control right.  We don’t speak of it.

While I tend to go on and on about the community here and all the tools we’ve built on the Commons for CUNY, one of the things I admire the most about the site is its visual culture.  Look around – it’s a handsome place.  One of my favorite things to do here is check out what people use for icons in their profiles and groups.  The Math Matters group, CUNY Wide Composition and Rhetoric, Eva Fernandez’s menacing hand icon…all of these tiny eruptions of image that speckle the site provide wonderful opportunities for art, humor, mirth or impact.  One of the great things about using WordPress for a project like this is watching how members take themes and stretch them out into new forms.  It’s an amazing opportunity to be able to learn from others how to get the most out of the basic structures available to us.

In the last few months there’s been an explosion of art and photography blogs on the Commons.  In this month’s Ground Control Michael Smith talks about his latest blog ‘Pictures of CUNY‘ and the process of excavating CUNY’s analog and digital archives for photos.  Chris Stein talks about why he decided to share his photography with the Commons community and how he goes about picking his subject matter.  Scott Voth has a fantastic post that’s loaded with resources for anyone who wants to spend some time improving the look and function of their own blog.

As the site and community grows it will be exciting to see how the look of the place grows with it.  I think, for me at least, the biggest measure of success I have when thinking about the Commons and the aesthetics of the site is that it looks uniquely its own.  Not only when compared to the official sites for the University’s 24 campuses, but also when stacked against other online communities in the wild.  I’d put the Commons up against Wallpaper* or Frieze‘s sites any day.  In the meantime I have to get back to figuring out whether #1F1F1F or #262626 is a better shade of grey.