You are here: Home > Timing is everything… 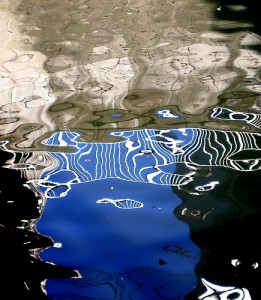 Perhaps it’s because November was the month where I had to facilitate an ePortfolio faculty development workshop based around the concepts of “integration” and “reflection,” post a reflection of my experience in a recent jam in “Connect To Learning” — a 3-year FIPSE-funded collaboration designed to strengthen reflective ePortfolio practice, and reflect in the personal statement for my graduate school application (if I created a word cloud up until this point, it would look like  this), but I figured it was a perfect time to finally look back at my time here on the Commons. That and the Irish/Jewish/Catholic (I know, right?!) guilt kicked in about finally finishing the post that Brian asked us all to write at the beginning of the semester (sorry, Brian ツ ).

I first learned about the Commons when I started working on the ePortfolio project at CUNY School of Professional Studies back in 2009, the same year I graduated from one of their completely online undergraduate degree programs. After learning about the site from a colleague, I immediately signed up for an account and jumped right in. First, I joined the ePortfolio group and navigated my way over to the ePortfolio wiki pages; adding to existing pages, creating new pages, and linking related pages. What struck me was how different it was from my experience on Blackboard and how open it was. I actually missed the interaction on Blackboard discussion boards and saw the Commons as a way to extend my learning network. Don’t get me wrong, I’m not trying to say that the Commons is an LMS, but I got stung by the lifelong learning bug and I found the Academic Commons to be a great space to get my learn on. Even better, I could actually create stuff and contribute to other projects. As a supporter of open access and open source software, I was impressed by the transparency of the site and project.

I was a little bummed when I learned that the Commons was not available to undergraduate students, especially after seeing its potential as an ePortfolio platform, but after learning more about the support structure necessary to support all CUNY students I realized it was a necessary evil. After attending and presenting at my first CUNY IT conference and learning about social networks at Macaulay and Baruch, I secretly hoped that one day the Commons would be available to all CUNY campuses. As I look over the agenda for that conference now, I see a lot of familiar names. I also see that this was the conference that introduced the CUNY Academic Commons to the CUNY community! I remember seeing Matt and Boone and a couple of other folks at the conference, when they were drawing names for prizes at the end, but I was too much of a n00b to introduce myself at the time.

The following year I jumped at the opportunity to be a part of the Commons community team and contribute to the project. I felt very welcome by my fellow community facilitators Brian Foote and Scott Voth, and the best word to describe the vibe between the development team and community team would be… simpatico (no, not the movie). After taking some time to settle into a steady routine, one of my chief main tasks was to manage the Commons accounts on Twitter, Facebook, and Google+. It was and is a great way to learn more about members, their interests, and new things in general.

When I began posting to Hootsuite, the social media manager I use to schedule posts to the different accounts, we had a modest amount of interest on Twitter (still do on Facebook – cough), and Google+ didn’t exist. In the past couple of years, we’ve gained over 1,000 followers on Twitter and it has become the stand out social media application for both students and faculty — at least according to my weekly social media stats. Boone recently created a URL shortener, cuny.is, which I use in conjunction with Academic Commons related posts to measure click through rates each week. If you take a look at the posts on our social media accounts, you’ll notice each link has “http://cuny.is/” at the beginning of it. In the past three years we’ve posted 4,000+ tweets and updates.

I’m now excited to be involved in a new project on the Commons, albeit not nearly to the extent of other members of the Commons team. While I don’t have a lot of experience with coding and graphics design, I’m extremely happy to be a part of the Commons In A Box project by responding to support forum posts and contributing to the @cbox Twitter account. I firmly stand with the ethos of the project and couldn’t be more thrilled that my hope of a “Commons” being available on all CUNY campuses is that much closer to being a reality. As Brian mentioned in his post, the Commons team will all be presenting together this Friday at the 11th annual CUNY IT Conference. This will be my first time presenting with the team and I’m truly looking forward to presenting with such an amazing group of people and sharing our work and yours with the rest of the CUNY community.

View all posts by Sarah Morgano →